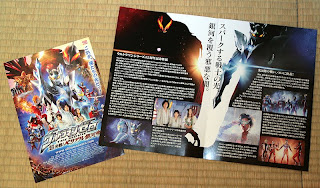 I saw the latest Ultraman movie at a press screening over at Shochiku last night; a great demonstration of how infrequently I update my blog seeing that my coverage of last year's movie is only a few posts down this page!

Having not followed any of the hype surrounding this year's movie, I went in with few expectations and very limited knowledge of what the movie was about. In the age of internet spoilers, and simply due to the work that I do, it's very rare that I get to see an Ultraman film in this way for the first time. It's definitely a much nicer experience!

Overall I was pleased with the film. Rather than rehashing what we saw in last year's movie, it draws upon it's strengths and takes it to new places. The shift from straight action to fantasy adventure is a welcome one, and while I was expecting to miss Mike Verta's howling score from last year, Kenji Kawai's music perfectly compliments the fantasy atmosphere of this year's venture.

If you're a fan of ULTRAMAN NEXUS like myself, there are also a couple of fun surprises in this film for you! Perhaps no surprise considering this film was penned and directed by former NEXUS director Yuichi Abe.

I'm currently working on translating the official press notes into English, which will be published on SciFi Japan later today (in which we will also announce the official English title of the movie). My proper review of the film will follow as soon as I've had enough coffee to drag myself back to the keyboard!